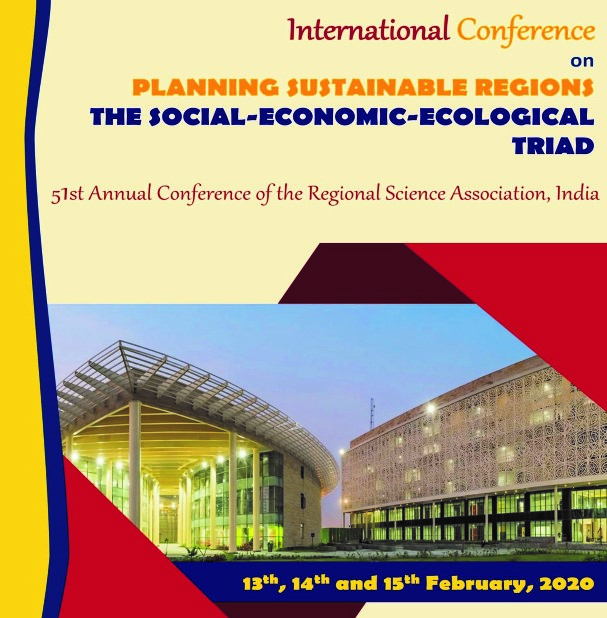 The 51st International Conference of the Regional Science Association will be hosted by Amity Institute of Environmental Sciences and Amity Institute of Social Sciences of Amity University, Kolkata on 13th, 14th and 15th February, 2020. The conference is open to regional scientists, practitioners and researchers in the field of regional science. It will include Keynote Lectures, Plenary and Scientific Sessions.

In the broadest sense, any social science analysis that has a spatial dimension is embraced by regional scientists. As a subject, it was initiated in 1940’s by economists who were dissatisfied with the level of regional economic analysis, led by Prof. Walter Isard and his supporters to promote the "objective" and "scientific" analysis of settlement, industrial location, and urban development. Isard targeted key universities and campaigned tirelessly. 2019 was his 100th birth anniversary and we hope to continue celebrating his works in the 51st anniversary of the Regional Science Association.

The Regional Science Association in India (RSAi) was born in 1964, when Prof. Isard visited the IIT Kharagpur in India and has been carried forward by Prof. Chitta Ranjan Pathak who has led its development through the last 50 years. Its biannual journal, Indian Journal of Regional Science has been published since 1967. Over the last 50 years, RSAi Annual conferences (both national and international) have been hosted by eminent institutions across India including IIT's, IIM's, Mumbai, Baroda, Nirma, Calcutta, Tripura Universities, School of Planning and Architecture to name a few. As a befitting Golden Jubilee celebration, RSA India was selected to host the 12th World Congress of Regional Science Association International, The first World Congress was held at Harvard University in 1980 and its 12th at Goa, India.

All the applicants are requested to fill up the registration form using the link:
https://docs.google.com/forms/d/e/1FAIpQLSdXOYWdC7Ei2W9mGwlNFeSsUYst2iE_GuDbAPBK8zhCf7qcew/viewform